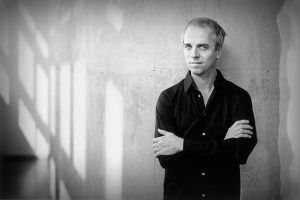 Jeroen van Vliet, born 1965, is known for his lyrical style and clear sound at the piano. He is a composer, pianist and keyboardplayer in a wide variety of groups. In 1985 and 1988 he won both first- and soloist prizes at the main contests of the Netherlands. Between 1989 and 2007 he was the pianist in the groups of alto-player Paul van Kemenade and of bassplayer Eric van der Westen. Throughout the years he worked with international artists as (a.o.) Bob Malach, Kenny Wheeler, John Zorn, Norma Winstone, Charly Mariano and Erkan Ogur, Jakob Bro.

As a sideman van Vliet recorded about 50 albums, as a leader 9. His cooperation with trumpeter Eric Vloeimans resulted in a number of albums and concerts, both as a duo as well as in the group Gatecrash (Edison Award in 2007). Among his groups are the Jeroen van Vliet Trio and the Jeroen van Vliet Electric Trio. In 2008 the new group Estafest started: energetic, exciting and adventurous. After receiving the Composition Assignment of the North Sea Jazzfestival 2008, van Vliet invited his group – called Sikeda – that performed his music, to record and tour in 2010. In 2013 he worked in South Africa with bass-legend Carlo Mombelli. He travelled to Australia, India, China, South-Korea with Gatecrash and the Yuri Honing quartet.

Currently Jeroen van Vliet works with German-Afghan singer Simin Tander, Jeroen van Vliet’s OGU, solo, Estafest, Eric Vloeimans’ Gatecrash, and the Udo Pannekeet 4tet. In 2014 he released 2 albums, the solo-album ‘Wait’ and the trio-cd OGU. The new album ‘Eno Supo’ by Estafest, as well as the albums ‘Where water travels home’ by Simin Tander 4tet and ‘On’ by Udo Pannekeet were released. All got great reviews.

In 2014 Jeroen van Vliet was awarded the most important prize in the Netherlands for jazz and improvised music, The Boy Edgar Prijs.