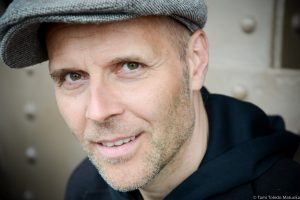 Martin Fondse (February 20, 1967, Bergen Op Zoom) is a Dutch pianist and composer. He also plays the Vibrandoneon, the baroque version of the melodica. He is a renowned composer and arranger in the fields of jazz and contemporary music, and continuously is breaking ground between musical styles and cultures. Martin is initiating various musical projects and he is leading his own Martin Fondse Orchestra (formerly known as ‘Starvinsky Orkestar’).

Martin Fondse’s warm, dynamic and highly communicative music has been influenced by many sources and inspirations. Always searching for new and open ways of creating music, he establishes a remarkable balance between composition, improvisation, dialogue and personal expression. Martin’s works range from solo pieces to compositions for symphonic orchestras. He studied composition with Bob Brookmeyer, Dolf de Kinkelder and Bill Dobbins. Amongst his piano teachers were Robert Vermeulen. Rob van den Broeck and Kenny Werner.

In 2008 he founded his own orchestra: Starvinsky Orkestar, now known as Martin Fondse Orchestra. The line up is based on Martin’s first group the Martin Fondse Oktemble, now completed with a string quartet section. They released one cd, entitled ‘Fragrant Moondrops’, which has also been released as a double album on Vinyl. The MFO played on renowned venues and festivals like: Bimhuis, Amsterdam, North Sea Jazz Festival, Music Meeting Nijmegen, November Music Festival. In 2011 they did a remarkable collaboration with British sound wizard and composer Matthew Herbert. Since 2013, the Martin Fondse Orchestra has an energetic project with Brazilian vocalist-guitarist Lenine, under the title The Bridge. Co-produced by Music Meeting. Concert tours in Holland, Germany, Portugal and Brazil.