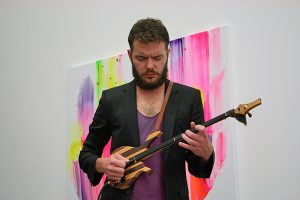 Pioneering guitarist Aart Strootman (1987) throws a solid knock on the door of the music business of our times. His intellect and frank, fresh view on musical genres and styles justify a most prominent position in the music scene.

Since 2009 Aart Strootman teaches music history, (advanced) eartraining, analysis, philosophy and performance studies at the Fontys School of Arts in Tilburg. With percussionist Arnold Marinissen he is artistic leader of contemporary music ensemble F.C. Jongbloed. An ensemble commisioning new works by students composition from all over the Netherlands combined with material from the most recent music history. He is a member of a collective of composers programming the contemporary chamber music series De Link in Tilburg.

In Strootman / Stadhouders, a duo with guitarist Bram Stadhouders, he plays music that blends improvised and minimal music. In 2012 he found minimal-chamber-metal band TEMKO. Besides that he regularly plays guitar at ensemble Lunatree, Klang, StarGaze and played together with dance companies T.R.A.S.H. and Club Guy&Roni.

In 2012 Aart Strootman was awarded “Brandstof” talent by the BKKC, followed the next two years by MuziekLab’s “New Arrivals”. In 2014 Aart was granted “Nieuwe maker” by the Dutch Fund of Performing Arts. With this support he follows masterclasses composition with Nik Bärtsch in Zürich, Steven Mackey at Princeton university and Georg Friedrich Haas at Columbia university.

He has played solo with Britten Sinfonia, the Radio Orchestra of Hessischer Rundfunk and the New York Philharmonic. As a soloist he played recitals at the most diverse venues: from local museums to the Barbican Hall, from Amsterdam to Wellington. Most of these concerts are given on homemade instruments developed via elaborate collaborations with composers. An 8-string guitar was made for Steve Reich, a 5-string tabletop instrument for Anthony Fiumara and so forth.

As a composer Aart is working for the theatre collective EELT and wrote music for numerous theatre plays. Also he wrote music for F.C. Jongbloed, DissonArt Ensemble, TEMKO, Ramon Lormans, Jacqueline Hamelink, Vincent van Amsterdam and many others. Notations he made for Lunapark, TEMKO and Wouter Snoei.

Album(s) by Aart Strootman are for sale in our webstore