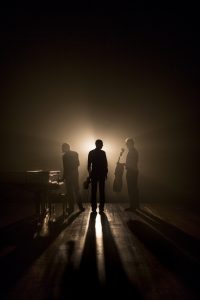 Storioni Festival
The Storioni Festival is an international chamber music festival that spans the province of North Brabant (the Netherlands). It includes both performances in the region’s concert halls as well as several alternative festival locations. The festival first came into existence thanks to the Storioni Trio; the famous chamber music ensemble with its roots in ‘Brabant’ that has earned a place at the very top within the genre. The Storioni Trio is a very welcome guest at the greatest venues. During the festival, the trio invites musical friends from both home and abroad to join them. Earlier editions have included guest celebrities such as Alfred Brendel, Vadim Repin, Gidon Kremer, Jean-Yves Thibaudet, Nelly Miricioiu, Natalia Gutman, composers such as Gya Kancheli, Nico Muhly, Peteris Vasks and countless young talented musicians. The festival was organised for the first time in 2008.

The Storiono Trio work together with Frank Veenstra, artistic manager of Muziekgebouw Eindhoven, to compile the festival programme. As hosts of the festival, it goes without saying that the trio can be heard often during the festival; as trio but also in various different ensembles together with guest musicians from all over the world. The programme is based on four themes; concerts with top international musicians, new works from two Composers in Residence, the Storioni Academy for up-and-coming new talent and participation projects for amateur musicians.

The festival programme is characterised by the forgotten jewels, classic pieces and works that are commissioned specially for the festival. This makes the festival interesting for a wide audience. With an average occupancy of 91%, 20 concerts throughout Brabant and the Storioni Academy, the Storioni Festival can count itself as the largest and most prominent classical music festival in the Netherlands.