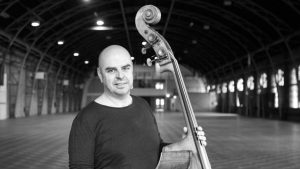 Eric was born in Zierikzee (Zeeland) in the Netherlands on August 29 1963. At the age of 10 he started to play guitar, switched to bass and as a teenager, formed his own pop bands playing hard rock and new wave in the late 70’s and early 80’s. He received first serious music education at the age of 19, after quitting his psychology study at the University, when he decided to become a professional musician. It was then that he picked up the double bass. After half a year he enrolled Sweelinck Conservatory in Amsterdam where he graduated in 1990.

During the latter part of his study he started to play with Dutch jazz legends like Willem van Manen and Paul van Kemenade, in whose band he would remain for 14 years. In the passing of time he became a solid but creative workforce in many bands with musicians like Jasper Van ‘t Hof, Bob Malach, Kenny Wheeler a.m.o.

He developed a career as composer of modern crossover improvised music in which his band Quadrant played a pivotal role. He recorded 6 albums under his own name and numerous more as a side man. During the 90’s he took a serious interest in African music which brought him all over Africa and resulted in concerts with a wide range of musicians like Habib Koité, Louis Mhlanga, Winston Mankunku, Paul Hanmer, Minyeshu & Les Frères Guissé.

His current bands as a bandleader are Private Time Machine and A Traveller’s Tale.