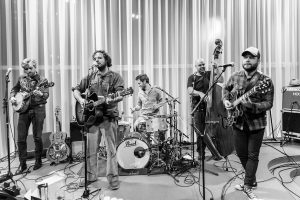 Dieter van der Westen plays a mixture of Americana, Indiefolk and World Music. His music can be acoustic, stilled and introverted but also groovy and energetic, depending on the situation. Dieter uses preferably acoustic instruments in his music. The lyrics are associative and partly autobiographical, the melodies simple and pure.

His second solo album titled “Old oak tree” was released in 2016 and got great reviews from Heaven music magazine and other music critics like Stan Rijven (Trouw) and Jan Donkers VPRO. Songs from the album were broadcasted last year in The Netherlands, Belgium, the USA, Greece, The UK and India.

Due to the succesfull release of Old Oak Tree Jerome Williams from Earthbeat management agency asked Dieter if he didn’t feel like performing with these songs, since it was in the first place a homestudio project, and Dieter started to form his own band together with bassplyer and brother Eric van der Westen (Sezen Aksu, Martin Fondse, Lenine). Eric asked a few musicians in his network and enthusiastic reactions came from guitar player Aron Raams (Gare du Nord, Paul de Leeuw), drummer Gijs Anders van Straalen (Wouter Hamel, Room Eleven), and from Banjo and Dobro player Joost Abbel (Zorita)

In 2017 the first concert they played was at national radiochannel De Concertzender, but soon shows followed at Divercity festival, The Hague and in Paradiso in Amsterdam. For the Autumn and winter theatre concerts and radio performances are planned and the new album with the band is to be released in the spring of 2018.

Besides his work with his own band Dieter is also one of the driving forces behind the North African musicgroup KASBA with which he is internationally active in Europe, Africa and South America and with which he had two nr 1 hitsingles in the North African music charts. In the Netherlands Dieter worked with local known artists like Thé Lau, Blof, Paul de Leeuw, Frank Boeijen, Ali B, Eric Vloeimans, Gerard van Maasakkers, Eric Vloeimans, Astrid Nijgh and the Grammy award winning Metropole Orchestra.