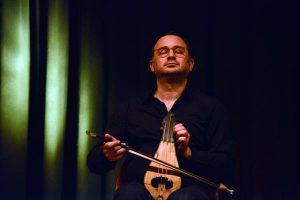 Derya Türkan is a young master of classical Turkish kemenche (3-stringed fiddle). He plays improvisational as well as the Ottoman classical music repertoire. Born in Istanbul Turkey in 1973, he grew up in a musical family and his first music lessons were with the well known Turkish cellist Firat Kiziltug. From 1984 to 1994 Türkan attended and graduated from the Turkish Music Conservatory Instruments Education Department of the Istanbul Technical University, where he studied Kemançe with Ihsan Özgen.

In 1990, Türkan was invited to join the Istanbul State Classical Turkish Music Ensemble, directed by Necdet Yaşar, and played Kemançe there for seven years. He began working at TRT Radio Istanbul in 1991, where he earned outstanding praise, and obtained a permanent status in 2000. He had the opportunity to perform alongside such master musicians as Alâeddin Yavasça, Bekir Sidki Sezgin, Niyazi Sayin, and Erol Deran, Mutlu Torun, Inci Cayirli and Yavuz Ozustun. During this time, he performed at many concerts both nationally and internationally with well known groups such as the Necdet Yasar Ensemble, and Ihsan Özgen’s Anatolia Ensemble.

Working with Kudsi Ergüner since 1992, Derya Türkan was involved in the projects of Kudsi Erguner like Islam Blues, Ottomania, Osmanlı Davulları (Ottoman Drums), La banda Allaturca and Tac Mahal. Together with him, he released an album called “Chemins” recorded and released in France. In 1996, they participated in the concert of Sir Yehudi Menuhin’s 80th Birthday Celebration organized by the President of France in the Paris-Sorbonne University . In 1997, the album Istanbul’dan Mektup (Letter from Istanbul), a collaboration of Derya Türkan and Sokratis Sinopoulos, a reputable Greek Kemançe player, was released by Golden Horn Records in USA. Later, he formed a duo with Murat Aydemir, a distinguished tanbur player. The duo’s albums Ahenk, Volume I (1997) and Ahenk, Volume 2 (2006) in which they presented classical instrumental pieces were released in USA by Golden Horn and in Turkey by Kalan Music. Derya Türkan and Murat Aydemir embarked toured Germany in 2003 and California in 2005, and gave eight concerts. Another album, Fuad, a collaboration with Erkan Oğur and Djivan Gasparyan, Armenian duduk player, was released in 2001 by Kalan Music. In 1997, he established the “İncesaz” ensemble with Cengiz Onural and Murat Aydemir, and since then he has released 8 albums and a DVD with this ensemble. In 2006, Kalan Music released the album Minstrel’s Era featuring Renaud Garcia Fons and Uğur Işık. He received worthy criticisms published in the magazines Songlines and The Strad. This trio participated in the Berlin Philarmonic and Essen Philarmonic Orchestra, and gave concerts in Vredenburg Utrecht, Amsterdam Concertgebouw, Ljubliana Druga Godba Fest, Madrid and Zaragoza. As a soloist, he toured with the National Youth Orchestra of Germany directed by Howard Griffits and Sir Simon Rattle.

Since 2004, he has been holding Kemançe seminars at the Labyrinth Musical Workshop, a school founded by Ross Daly in Crete. He was featured in the albums of Jordi Savall called Orient-Occident, La Sublime Port and Mare Nostrum. He gave many concerts with the Hesperion ensemble. His album Kemenjazz, a collaboration with Baki Duyarlar was released by Ada Music. He was the Turkish music director of the movie Yahşi Batı directed by Cem Yılmaz. In 2012, he played the soundtracks of the movie Argo, directed by Ben Affleck.

Türkan has given many concerts in the United States, France, Germany, Finland, Italy, Spain, Holland, Belgium, Poland, Greece, Israel and many other countries in addition to his native Turkey. In particular, he performed and gave workshops in the USA in universities such as MIT, Harvard and UC Santa Cruz as well as New England Conservatory.